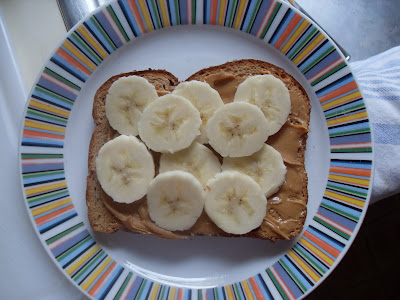 .....with peanut butter and banana for breakfast. Since I've been home all week I've gotten to keep produce in my house longer, since our commute has been causing our absence. I've been packing up for a move from Denton to Dallas, and trying to find the motivation to work on cover letters, portfolio, and fine tuning of my resume to find a job as an art teacher. Knitting is distracting me!!
Posted by Katy Rapier at 8:26 AM 1 comment: 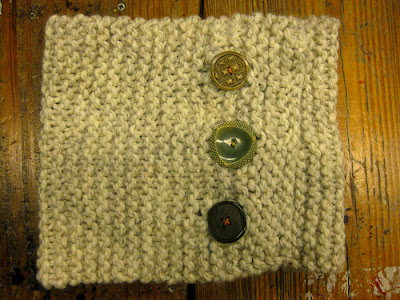 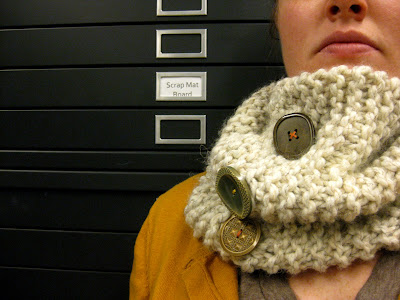 I've been wanting to make myself a big button cowl for several weeks and I finally did it. The buttons were my grandmothers, unused from previous projects she would use one or two and have a stray one left. The yarn is Lion Wool-Ease the color wheat. It's super warm and will match most outfits I wear.
Posted by Katy Rapier at 11:07 AM 1 comment: 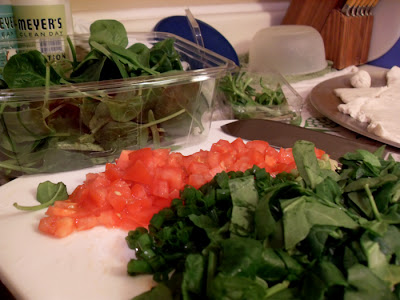 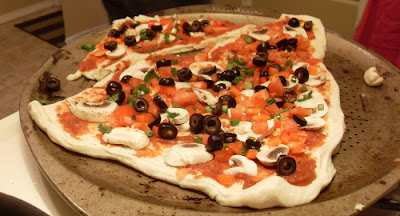 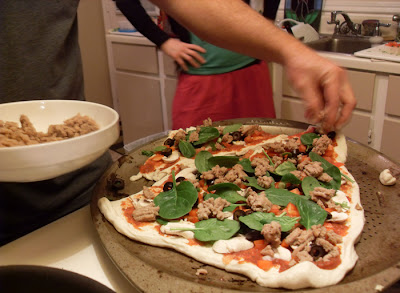 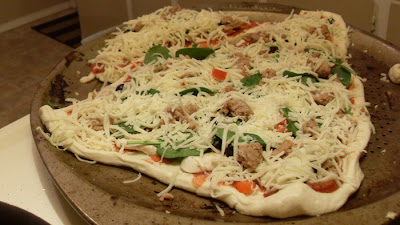 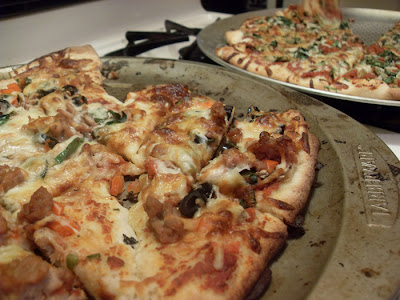 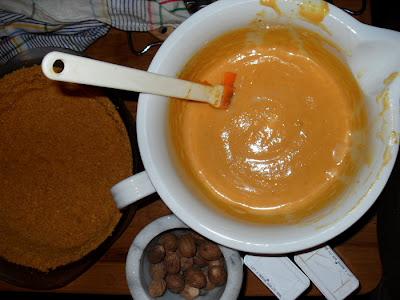 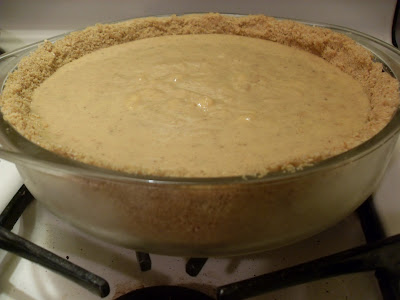 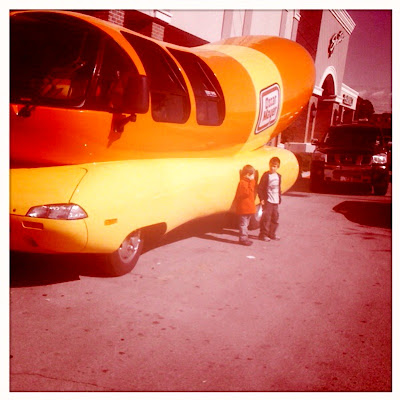 Last weekend we went to the grocery store after lunch with friends to get some dinner. (The store was a mad house because the were having a remodel party for the store. Looks gorgeous, but no one could find anything cause it's all in new places) T.J., Rachel, and I walked around dazed in the amount of people there. We walked the store several times thinking of something to grill. I saw something that sparked the idea of making a pie, a pumpkin pie. Rachel just let out a long MMMMMMMM, and replied I'm down! T.J. found us later and said, "I'm thinking of not grilling and making pizza instead." All of our eyes lit up. We again ran around the store, returning to isles we had already been to three times before and found everything we needed so we wouldn't have to return to this mad house! The Oscar Mayer Wiener car was there and I caught a photo of two little boys getting their picture taken by their mom. Little kids were running around with Oscar Mayer whistles. We all came to the conclusion that we were have a PIE PARTY, even tough we were the only ones participating.
Later that night we made the pizza pie. Rachel and T.J. made them while I photographed and got my pumpkin pie crust ready. The pizza turned out good, Rachel made a vegetarian one and T.J. made a turkey one. (Rachel's was better because it didn't get burned on the bottom) After dinner I filled my pie. Unfortunately I didn't get an after photo. I put some cool whip on mine and curled up on the couch and ate my favorite, pumpkin pie! Later that night at 3 am I walked into the kitchen to find 7 very hungry friends devouring it, so no picture for the blog. T.J. was nice enough to make me another the next night because I was so bummed. What a good guy.
Posted by Katy Rapier at 11:01 AM No comments: 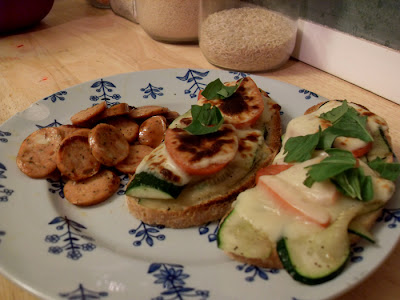 BREAD!!! Who doesn't love carbs. They are my guilty pleasure! Our Kroger around the corner has been remodeled. The bakery has fresh breads that I have been drooling over for the past couple months. I finally decided to buy some and build a meal around just the bread. This loaf is rosemary olive oil. We sautéed some zucchini put it on the bread, added fresh tomato and mozzarella and broiled them till a little brown on top, then added basil. It was delicious! T.J. is an advocate for protein so we had some artichoke and mozzarella chicken sausage on the side to go with every bite. So simple, yet SO GOOD!
Posted by Katy Rapier at 3:11 PM No comments: 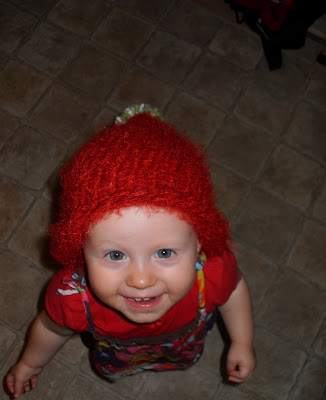 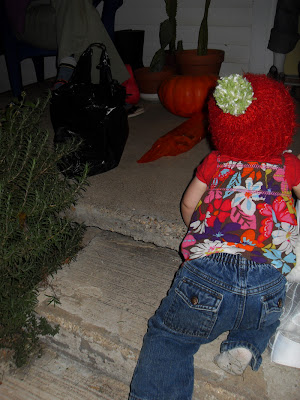 I have been starting Christmas presents for all my nieces. This hat Maggie modeled for me. It looked so good on her that I thought it could be a OOPS early gift, instead of the intended niece I was going to give it to in Austin. It worked out, because it would have been too small for Izzy. The first time Maggie felt this Angel Hair yarn she had pulled out of my yarn bag full of curiosity and felt how soft it was. She rubbed against her face and let out a sigh of AHHH! It was the cutest thing. I have more to make in different colors. All my gifts this year will be handmade since I'm doing free labor with student teaching. They are fun to make and feel more special then just going out and buying one.
Posted by Katy Rapier at 3:03 PM 1 comment: 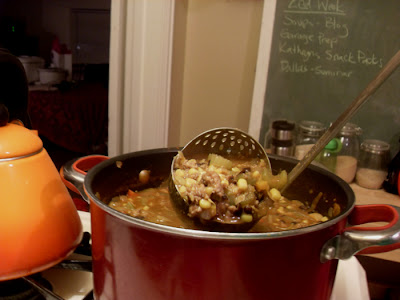 Wednesday T.J. wanted to make turkey chili. We had just got home from being out of town and it was a great meal to welcome us back. We shared it with family and took some for lunch the next day. It is the season for soup.

Posted by Katy Rapier at 2:51 PM No comments: 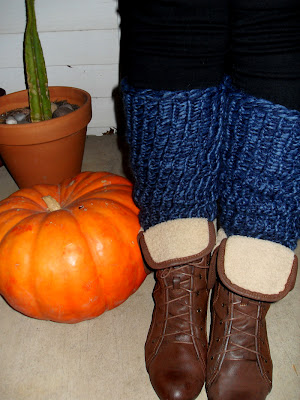 I finally made my leg warmers I said I was going to make by using a baby hat loom and binding off with circular needles. It was easy but I had to use two skeins to complete them. I wanted super bulky ones that would be great to wear on a cold night by the fire whether camping or even just in my backyard. I completed them while playing Trivial Pursuit with the guys. This weekend we built a fire in the pit, made soup from Cassie's blog, had friends over, and had some beers. It was relaxing and I was extra warm with my leggings. I bought some olive green yarn to make more! Can't wait to wear them again.
Posted by Katy Rapier at 2:08 PM 2 comments:

Last night we made homemade Chicken Tortilla Soup a recipe we got from the Food Network website. It was quick and easy and really yummy after the a lame incident in the Kroger parking lot. We had forgotten the chicken broth :( T.J. just got a new car and I went back to the store to pick up the much needed ingredient and when I came out of the store someone had hit T.J's beautiful new car and drove off with out leaving any of the their insurance information. I was heartbroken after two nice girls told me what happened and apologized because they didn't catch the jerk face's license plate number. I got back to the house and broke the news with tears to follow. T.J gave me a big hug while I was stirring the onions and said "It's not your fault baby." I would have gotten more photos of this yummy meal but I was distracted. I remembered at the end and got a few pics. It was delicious and was eaten on the couch while watching some TV.
Get the recipe here http://www.foodnetwork.com/recipes/rescue-chef/chicken-tortilla-soup-recipe/index.html
And don't be afraid to add Spices....highly recommended (chili powder, cayenne...)
Posted by Katy Rapier at 1:58 PM No comments: 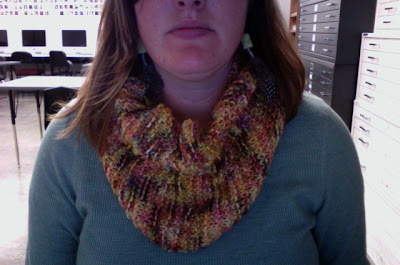 I finally finished my cowl from the yarn I bought at Shabby Sheep. I pulled it apart once and started over because I wasn't happy with with the first attempt. It's super soft and I love how crazy the colors can go with plain colored shirts.
Posted by Katy Rapier at 10:30 AM No comments: 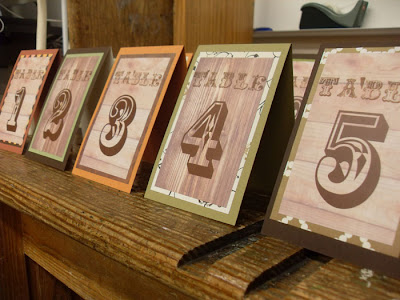 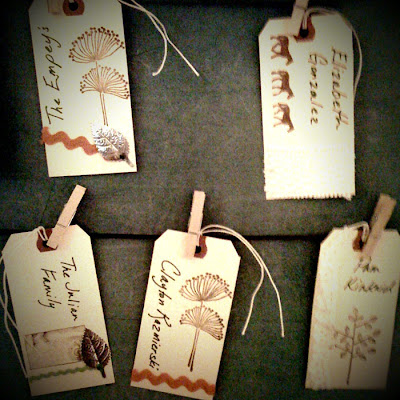 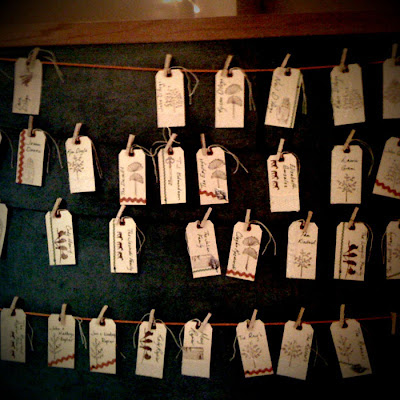 The rehearsal dinner was a success. There was an old chalk board at the venue and I tapped ribbon too and my mom brought mini clothes pins to attach all the name tags I made. We had ten tables and I made number tents with left over paper I had, inDesign, a printer, a stamp pad, and a full alphabet of Rosewood type stamps.
Posted by Katy Rapier at 2:40 PM 3 comments:

Katy Rapier
I started this blog in October 2010 to share things I enjoy to make day in and day out. I'm art educator and love to craft in my free time. Sewing and Knitting are my two favorite things.